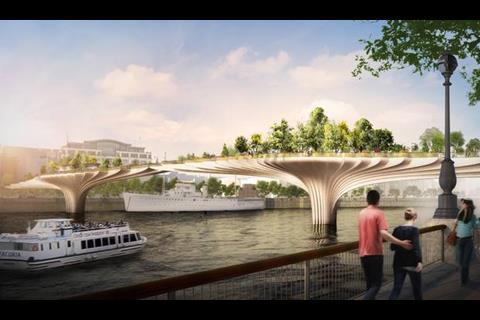 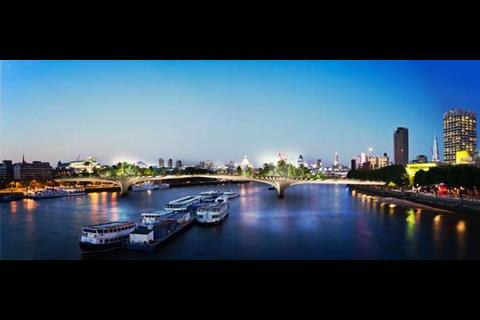 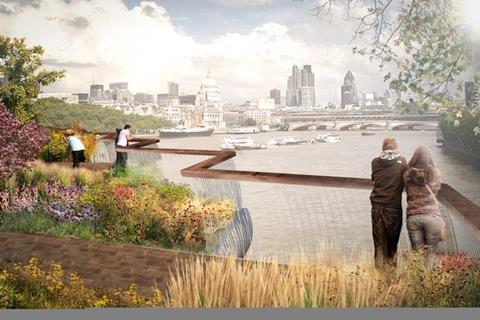 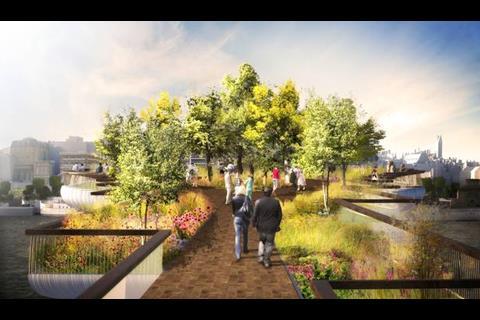 The Mayor of London has unveiled plans for a new garden bridge to span the Thames, designed by London 2012 Olympic cauldron designer Thomas Heatherwick and Arup.

The £60m bridge would span the Thames from Victoria Embankment, on the north bank, near Temple, to the South Bank between Waterloo and Blackfriars bridges, providing a new walking route from Waterloo to Soho and Covent Garden.

The design won a Transport for London tender for ideas to improve pedestrian access across the river. It would be the first new crossing since the Millennium Bridge opened to the public in 2002.

The design comprises a garden bridge and fits with Boris Johnson’s ambition to create “an iconic piece of green infrastructure” in the capital, along the lines of New York’s High Line, an elevated park planted on a former railway track.

Heatherwick said: “We are excited to have been selected by TFL to explore the opportunity of a pedestrian river crossing. The idea is simple - to connect north and south London with a garden.”

Heatherwick is working with Arup to develop the plans with an aim of submitting them for planning permission in spring next year, with the bridge earmarked for opening in 2016.

However, the mayor’s office confirmed the bridge is dependent on funding from the private sector, with a high profile sponsor likely to be sought, as was the case with ArcelorMittal’s contribution to the cost of the Orbit in the Olympic park and airline Emirate’s part-funding of the Air Line cable car.

Heatherwick said he had drawn inspiration from actor and campaigner Joanna Lumley, who has been a proponent of such an idea for several years.

Joanna Lumley said: “It’s quite strange to talk of something that doesn’t exist yet, but the Garden Bridge is already vivid in the plans and the imagination. This garden will be sensational in every way: a place with no noise or traffic where the only sounds will be birdsong and bees buzzing and the wind in the trees, and below the steady rush of water.

“It will be the slowest way to cross the river, as people will dawdle and lean on parapets and stare at the great cityscapes all around; but it will also be a safe and swift way for the weary commuter to make his way back over the Thames.

“There will be grasses, trees, wild flowers, and plants, unique to London’s natural riverside habitat. And there will be blossom in the spring and even a Christmas tree in mid-winter. I believe it will bring to Londoners and visitors alike peace and beauty and magic.”

Michele Dix, managing director for planning at Transport for Funding, said:”The bridge will help support economic activity whilst providing commuters arriving at Waterloo with alternative options to cross the river.

“Current emerging ideas for the bridge include direct routes for pedestrians alongside the creation of a major public space across the Thames incorporating a garden.

“TfL will work with the relevant authorities including Westminster, Lambeth and the Port of London Authority to further develop these plans, steering them through to planning permission stage. The construction of the structure is entirely dependent on third party funding.”