Heavyweight consultants among seven picked for the plans 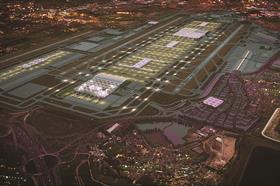 Seven big-name consultants have been chosen by Heathrow to design its plans for expansion.

Architect Grimshaw was appointed over the summer and beat a number of others to the role including Zaha Hadid Architects and HOK.

The group, whose four-year contracts started last month, will now be known as the Integrated Design Team (IDT).

Grimshaw along with Amec Foster Wheeler, Arup and Jacobs were partly chosen due to their past work on the airport.

Heathrow said Grimshaw “earned” its role as concept architect within the IDT after its “successful” delivery of Terminal 2B.

Barry Weekes, head of design at Heathrow, said: “With their institutional knowledge of Heathrow, and proven record in building complex infrastructure projects, the members of the Integrated Design Team will allow us to hit the ground running to deliver Heathrow expansion.

“Their appointment is a significant milestone in what will be a fast paced design and engineering schedule.”

The appointment of the IDT follows Heathrow’s announcement of its client advisors in March of this year.

Arup, CH2M, Mace and Turner & Townsend will work alongside Heathrow to give it advice on planning, innovation and quality.