Fourth building in scheme was designed by AHMM

Hertfordshire contractor HG Construction has been appointed to the next phase of Argent Related’s Tottenham Hale development.

The pair has started construction on the fourth residential building at the development. 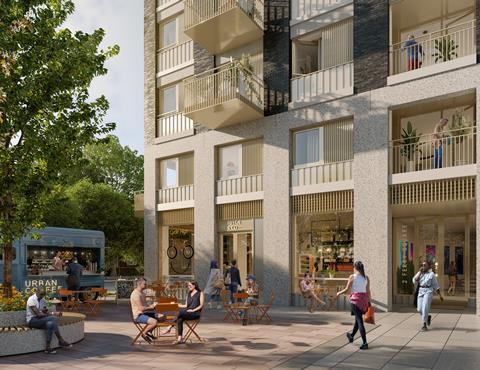 North Island was designed by AHMM

The North Island building, which was designed by AHMM, will deliver 136 new homes, including 80 shared ownership and 56 market sale.

There is 3,000ft2 of planned commercial space on the ground floor with flexible use for a cafe, restaurants and shops.

The construction of the North Island building is part of Argent Related’s Tottenham Hale regeneration scheme which will create a new neighbourhood including more than 1,000 homes, 15 retail spaces, co-working and office space.

There will also be a new health centre and three public squares.

Meanwhile, landscape architect Grants Associates has been commissioned to conceive the design of new public and green spaces.

According to Argent, the Tottenham Hale development has received strong sales demand for its first residential building, 1 Ashley Road with over 50% of sales completed.

That building has been designed by Alison Brooks Architects with 183 studios, one, two and three-bedroom apartments. Interior design has been carried out by Conran and Partners.

Galifford Try was appointed to build both 1 and 2 Ashley Road, which was designed by Pollard Thomas Edwards, after signing an £80m deal in June last year.

United Living will build 131 council-owned homes to be provided at council rents in partnership with Haringey council on the scheme’s third site. This has also been designed by Pollard Thomas Edwards.