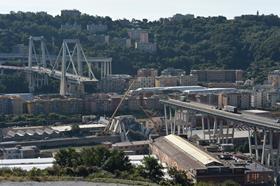 Highways England is attempting to reassure drivers that bridges across England are built to stringent safety standards and that none are of similar construction to the motorway that collapsed in Genoa last week, according to Highways England.

There are more than 21,000 structures on England’s network of motorways and major roads, none of which are of similar design to the one in Italy, according to the government body.

But it has pledged that it will make any necessary changes to standards and processes relating to road bridges once the causes of the collapse have been determined.

In a statement issued in response to the Genoa bridge collapse, Mike Wilson, chief highways engineer at Highways England, said: “We can reassure drivers that safety is and always will be our top priority. We have detailed design standards and quality control processes to ensure bridges are designed and constructed to provide safe and comfortable journeys for road users.”

There is a “thorough and regular regime for inspecting all structures, including bridges, on England’s motorways and major ‘A’ roads and taking any necessary action to help ensure they stay safe,” according to Wilson.

He added: “A very small proportion of our structures are suspension or cable stayed bridges but none of them are of similar construction to the one in Genoa.”

Despite this, Wilson said that once the causes of the collapse “have been investigated and reported we will carefully assess any lessons to be learnt and will bring in any required changes to standards and processes.”

Currently, road bridges are subject to a general inspection every two years. More detailed inspections, looking closely at all parts of the bridge, are typically undertaken every six years.

The confirmed death toll from the collapse of a 200m section of the Genoa bridge that sent vehicles plummeting 50m to the ground below stands at 39, with 15 injured. This number is expected to rise given 20 people are still unaccounted for.

While no official reason has yet been given for the sudden collapse of the bridge, questions have been raised over the quality of its design, construction and maintenance.