Schemes to benefit are in south-west London and Southampton 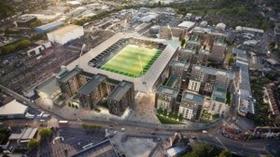 Housing minister Kit Malthouse is set to confirm that Homes England and Barclays Bank have agreed £155m of loans to speed up the construction of hundreds of homes in south-west London and Southampton.

The deals are the first to be agreed from the £1bn Housing Delivery Fund, which was announced by housing secretary James Brokenshire and former Barclays chairman John McFarlane in September last year.

Malthouse said: “Innovations are key to unlocking the next generation of homes and our Housing Delivery Fund – a £1bn partnership between government and Barclays – is a great example of the new approaches we’re taking to get more homes out the starting blocks.”

In Wimbledon, a total of £150m will be loaned to Merton Catalyst LLP, a joint venture between housing association Catalyst and developer Galliard.

The funding will be used to help press on with 604 apartments on the residential-led scheme at the former Wimbledon Greyhound stadium site in Plough Lane (pictured). The mixed-use development will also include commercial space, improved public realm and a new stadium for League One side AFC Wimbledon.

In Southampton, Cannon Capital Developments will receive a £5.3m loan to convert a former commercial building into 56 apartments for private sale on the city’s Ogle Road.

The Housing Delivery Fund was set up between the government and Barclays Corporate Banking to provide £1bn of loan finance to help SME developers to deliver new homes across the country.