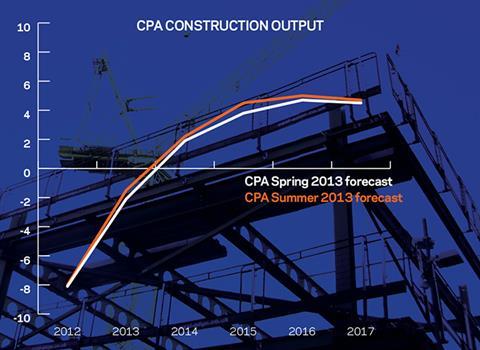 The construction sector will return to strong growth from next year, driven by an expansion in the housing sector, the Construction Products Association predicts

CPA economics director Noble Francis said the changes reflected the anticipated expansion of the private housing sector. The CPA predicts the housing market will continue expanding strongly, with private housing starts rising 15% in 2013, and growth until 2017 averaging 9% per year. Infrastructure is also expected to be a major driver of growth from 2014.

After a tough few years, it’s good to see optimism returning in the sector

Francis said: “Recent housing policies have proved that when government announcements are followed through, the result is immediate and significant. Should the government do the same in other parts of construction, this industry will further support the wider economic recovery.”
The CPA’s revised forecasts come amid encouraging signs of recovery across the industry, with the latest Markit/CIPS survey reporting a continuing rebound in activity in July, driven particularly by expansion in the housing sector.

The index hit 57 in July - up from 51 in June and significantly above 50, which separates growth from contraction. This was the fastest rate of growth since June 2010.

The survey of UK construction buyers found higher levels of business activity across all main areas. Residential building activity was the strongest performing category, with growth surging to its steepest since June 2010. Growth in housing activity has now been recorded for six months running.