Scheme is the first permanent structure to be delivered for HS2 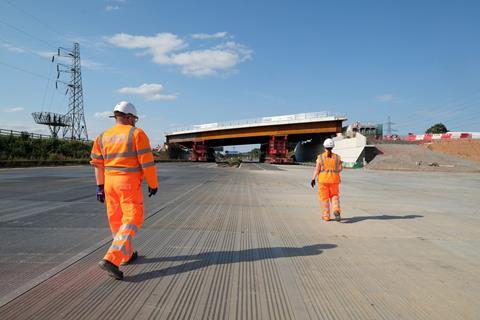 A joint venture between Laing O’Rourke and Murphy has completed the installation of a 65m modular bridge over a Midlands motorway.

The bridge, which spans the width of the M42, was installed in just two days and ahead of schedule as the motorway reopened 22 hours earlier than planned yesterday (Sunday).

Installation and construction were led by Expanded, Laing O’Rourke’s structures and geotechnical business.

The 2,750 tonne bridge was carried along the motorway on a self-propelled modular transporter. The 448-wheel transporter took one hour and 45 minutes to move the bridge span 150m into position, where it was attached to a composite concrete deck.

The major structural elements of the bridge supports and deck were made at Laing O’Rourke’s offsite factory in Nottinghamshire.

It is the first of four bridges to be built close to the new Interchange Station at Solihull.

It will form part of the major remodelling of the regional road network to improve the circulation of traffic around the HS2 railway line and connect the existing road network to the new station.