Industry drafted in to help areas stricken by floods 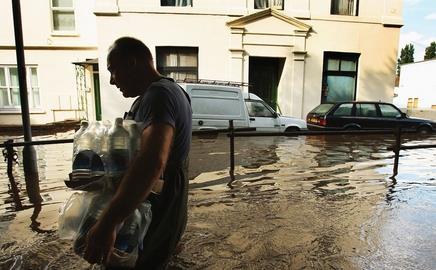 The construction industry has been called in to help fight the floods that have devastated much of western and southern England over the past week.

Companies including Atkins, Kier, Connaught, and Turner & Townsend have all been involved in the effort to battle the rising waters. Contractor Rok has delivered hundreds of litres of drinking water in Cheltenham and Gloucester, where water supplies were cut off.

Firms have also been gearing up to lead the recovery effort as the waters begin to recede, and are expected to contribute to the independent review of the floods being organised by Hilary Benn, the environment secretary.

Up to 14,000 homes have been flooded in Gloucestershire, and there has been damage to properties in Bedfordshire, Oxfordshire and Berkshire.

A number of housebuilders are understood to have schemes that have been affected in the area, although the National House Building Council said its members had requested anonymity at this stage.

Brian Berry, communications director at the Federation of Master Builders, said the huge demand for renovation work could highlight the skills gap in the sector.

“It will create a lot of work,” he said. “It’s something of a bonanza for small builders, but the worry is that it will be more work than they can deal with.”

As Building went to press, flood water was still affecting houses in the Midlands. Industry sources said it was too early to assess the scale of future renovations work.

Atkins has been working with the Environment Agency across the afflicted regions carrying out assessments of structural damage to flood defences. Atkins’ initial assessment is that the defences were not equipped to deal with the scale of the flooding.

An Atkins spokesperson said: “It was not due to the flood defences failing, but that the flooding was greater than the design parameters allowed for. It was an exceptional amount of water.”

Jean Venables, vice president of the Institution of Civil Engineers, said its members would be reporting to the environment secretary’s independent review in September on the state of the nation’s flood defences. She said: “Although analysis still needs to be done, we have seen very few failures. We will be looking very hard at our maintenance regime, and will examine the hydraulic capacity of the channels we are able to use.”

In northern England, where the floods have receded, Connaught and Kier have been assisting local councils with recovery work.

Working with Sheffield and Hull councils, the housebuilders have pumped water from properties, moved furniture and supplied dehumidifiers.

It is also understood that consultant Turner & Townsend has been called in to assess damage to Hull’s schools.

Meanwhile, Rok has announced it will set up a regional office in Hull to co-ordinate renovation work in the city, which has been one of the worst afflicted by flood damage.

A Rok spokesperson said: “We had a month’s worth of calls in two days. We are already setting up teams so we can respond as quickly as we can.”

Rok is already recruiting volunteers to join a special flood response team, but renovation and refurbishment work cannot begin until flooded properties are dried out. Experts said this can take as long as 12 months.

For the latest on the floods, go to www.building.co.uk/breakingnews