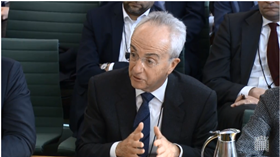 Carillion board members remained upbeat about the contractor’s financial position just five days before the company issued the profit warning that signalled the beginning of the end.

The minutes from the 5 July, 2017, meeting showed chairman Philip Green (pictured) had noted that “work continued toward a positive and upbeat announcement for Monday [10 July], focusing on the strength of the business as a compelling and attractive proposition”.

The MPs behind the inquiry, Rachel Reeves and Frank Field, said the board refused to accept the company’s position.

Frank Field, chair of the work and pensions committee, said: “Carillion’s chair appeared to lack even a tenuous grasp on the reality of the company’s situation. Five days before the profit warning that heralded the firm’s public spiral into insolvency, Philip Green stands like the Mayor of Pompeii – smoke billowing from the volcano behind him, lava cascading down the slopes – trumpeting the forthcoming revelries of the village fete.

“It is difficult to believe the chairman of the company was unaware of its position, but equally difficult to comprehend his assessment if he was.”

Rachel Reeves, chair of the business committee added: “A good board should be asking difficult questions. By contrast, the Carillion board, when faced with difficult answers, declined to face up to facts and did nothing to address the causes of the company’s decline.

“Its chairman, Philip Green’s assessment of Carillion as ‘a compelling and attractive proposition’ shows either a woeful lack of leadership or no grip on reality.”

The minutes, which have been published by the committees running an inquiry into the firm’s collapse, have been released alongside a letter to the inquiry from financial services firm Morgan Stanley.

Morgan Stanley advised the board “that it should consider a potential equity raise by way of a rights issue in mid-April 2017” and the following month Carillion instructed the firm to start preparing for a potential rights issue.

But, the board minutes show Morgan Stanley and Stifel, a brokering and investment banking firm, “were not able to underwrite the proposed equity issue” and had withdrawn as sponsors.

In the minutes, Peter Moorhouse, managing director at Morgan Stanley said: “The executive directors and advisers had worked hard to enhance the investment case…but [it] was materially short.

“The expected impact to the share price from the contract review given the current market rating meant that the investment case was insufficient to support an underwriting.”

The letter from Morgan Stanley said the firm was “increasingly of the view that Carillion’s senior management could neither produce nor deliver an investment proposition that would convince shareholders and new investors to support the potential rights issue”.

After Morgan Stanley and Stifel withdrew as sponsors, the board turned to HSBC who were appointed as joint corporate broker from four days after last July’s £845m writedown.