Report identifies ‘wall of money’ from Canada, the Far East and Middle East 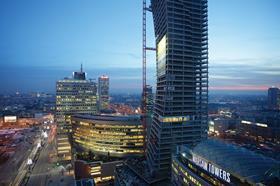 Global institutional investors have funds of $1tn (£600bn) to pump into European infrastructure assets over the next ten years, a major report has found.

The report by law firm Linklaters said the recent trend for heavy investment from Canada, the Far East and Middle East in Europe is set to accelerate, with the UK grabbing as much as a fifth, or $200bn (£120m), of this “wall of money”.

However, the report warns EU countries risk “missing out” on the investment due to regulatory uncertainty and “weak pipeline of assets available”.

Linklaters found global investors from Canada, China, Hong Kong, the Middle East, Japan and South Korea had increased their investment in European infrastructure assets by 465% between 2010 and 2013, compared with the previous four years, and predicted this trend would continue.

Middle Eastern countries increased their investment in European assets by 81% to $13.4bn (£8bn) over the same period.

“But this is dependent on the availability of sufficient high quality assets and projects, as well as continued regulatory and economic stability.”