The £8.5m contract will allow UCL’s Eastman Dental Institute to move from its current home 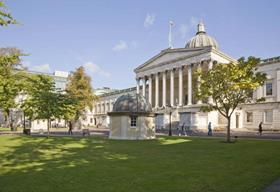 ISG has been chosen to build new space to enable UCL to relocate its dentistry school.

The £8.5m project will allow the London university’s Eastman Dental Institute to move from its current home at 256 and 123 Gray’s Inn Road near Holborn into its Rockefeller and Huntley Street buildings in Fitzrovia.

The project, which is being procured as a two-stage design and build contract, will take place across unconnected spaces on the building’s ground, first, second, third and fourth floors.

Work will be take place while adjacent spaces remain in use.

UCL is also currently in the process of appointing contractors to the first phase of its new UCL East campus in Stratford, east London.

Mace has been appointed to deliver the £200m first building, Marshgate I, while a contractor is expected to be appointed to the first phase’s second building, Pool Street West, in the coming months.

The Pool Street West contract is worth around £90m.