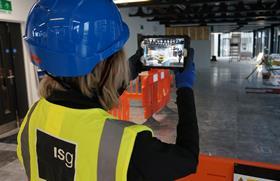 ISG is relocating its Manchester office as it targets revenue of more than £100m by 2022 in the region.

The firm, which will move into its new digs in the Tomorrow Building at MediaCityUK next month, said it already expects to hit £80m turnover this year across its Liverpool and Manchester offices.

Prior to joining Carillion at the end of 2015, he was the north west regional director for John Sisk & Son for nearly three years.