At least one fifth of all homes planned through the government’s £12bn affordable homes programme will be built using modern methods of construction, the government has said.

Housing secretary Robert Jenrick said the Ministry for Housing, Communities and Local Government had made the quota a condition of the programme and wanted modern methods of construction to be a “significant part” of the chancellor’s spending review, due to be published later this year. 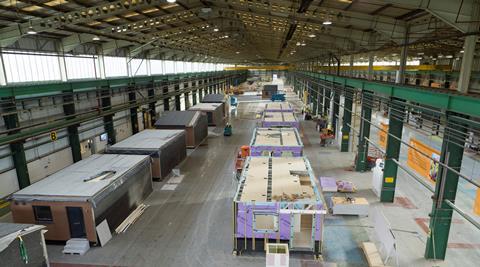 Speaking at a panel discussion on housing after the covid-19 pandemic at the Conservative party’s virtual conference, Jenrick said that he, chancellor Rishi Sunak and the chief secretary to the treasury Stephen Barclay were “hugely supportive” of using modern methods of construction to build homes.

Jenrick said: “We want this to be a significant part of our future housing investment plans and indeed at the spending review later this year. We’ve made it a condition of our £12bn affordable homes programme that at least 20% of those homes should be manufactured through modern methods.”

He added the government will review the quota every year and increase the percentage “if market conditions allow”. He said: “If we are able to do any further investments then I would like them to be majority MMC in the years ahead.”

Last month Jenrick announced that housing associations looking to sign lucrative partnerships with Homes England to build large numbers of homes as part of the affordable homes programme will have to use MMC to build at least 25% of their pipeline.

Earlier at the same panel discussion, L&Q group director of development and sales Fiona Fletcher-Smith urged the government to “join up some policy dots” and embrace offsite manufacture as a solution to three problems – the housing crisis, the need for more jobs and the need to tackle climate change.

Jenrick said: “This is so important, it’s a complete alignment of all of our objectives. It’s skills, it helps to tackle some of our labour shortage issues as we’re leaving the European Union so we don’t have to import so much labour.”

He added the approach would also help to improve building safety in the wake of the Grenfell fire as MMC homes would “become more and more sophisticated products”, though he warned that they would still need to be attractive and not “perceived as ‘anywheresville’ generic properties”.

Jenrick also said the expansion of permitted development rights as part of the government’s overhaul of the planning system created a “big opportunity to demolish some of the mistakes of the recent past”.

He added: “You do see quite a lot of empty derelict buildings in town and city centres that were put up, often poorly constructed, not within the character of those places, particularly in market towns in the 60s and 70s.”

He added that changing this was one of the reasons why he had brought forward the expansion in permitted development rights so that “local people this time around can decide what they want these buildings to look like which are often so central to their lives”.