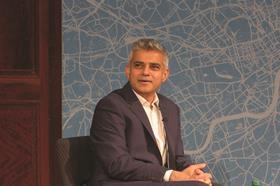 London mayor Sadiq Khan has said the new blueprint for the capital’s development over the next two decades will include additional safeguards for the green belt and open spaces in addition to targeting the delivery of 66,000 new homes a year.

The new draft London Plan – which will update the current London Plan, adopted in 2016 – is due to be published on Wednesday ahead of a consultation period that will run from Friday until March.

City Hall said the document would contain a package of strengthened environmental protection measures that, while not precluding development within the green belt, would make it harder for “harmful” proposals to win planning approval.

The London Plan is a material consideration for boroughs deciding whether to approve applications. City Hall said the proposed new guidance made it clear that applications would be refused by the mayor if they did not meet strict rules on what is appropriate, such as replacing existing buildings with new ones of a similar scale or the provision of new agricultural buildings.

City Hall said the draft London Plan would also strengthen protections for Metropolitan Open Land, which is a network of strategic, designated green spaces within the capital such as commons and parks, as well as including guidelines for increasing green infrastructure, such as trees on streets, green roofs, green walls, and rain gardens.

Khan insisted that building the quantity of housing that the capital required could be done without using up vital green space.

“When I became mayor I made it clear that delivering more of the genuinely affordable housing that Londoners so urgently need would be one of my top priorities,” he said.

“London needs 66,000 new homes every year to meet its increasing need and put right years of under-investment. But development must not be done at any cost: the green belt is the lungs of the capital and must be protected.

“I firmly believe we can build the homes Londoners need without sacrificing the green belt. This will mean more development on brownfield land, town centres becoming denser, incorporating more green infrastructure in our streets and developments and being more creative with how we develop the hundreds of small sites across the capital.

“Since I took office I have refused a number of developments which would have caused harm to the green belt.

“With my new London Plan I’m sending a clear message to developers that building on or near the green belt must respect and protect this vital natural resource.”

In addition to tying up areas of policy guidance, the draft London Plan will include updates on areas of growth for housing, industry and transport.

The current London Plan identifies “opportunity and intensification areas”, including Old Oak Common and the Greenwich Peninsula, where the capital’s most rapid housing growth is expected to be delivered.

Changes in Wednesday’s draft could involve the addition of new growth areas or alterations in the target figures for new homes identified in existing opportunity and intensification areas.