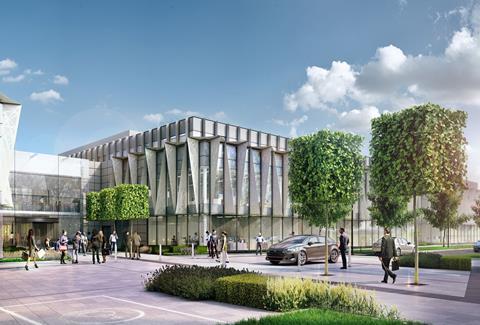 The work will provide 18,000sqm of Grade A office space and two multi-storey car parks with 800 spaces on the Arm campus site at Peterhouse Technology Park in Fulbourn.

The buildings, featuring bicycle parking, will be linked to the existing Arm buildings by a new estate road.

The office building will be constructed with a steel frame and curtain walling with vertical aluminium brise-soleil solar shading, which will form a six metre high saw tooth pattern.

The scheme is part of Arm’s plans to double its UK headcount in Cambridge to 3,000 people over the next five years.

Commenting on the award, Mark Dady, managing director for Kier Construction Eastern, said: “This development will give a real boost to the local economy and employment opportunities.

“At Kier, we recently expanded our Cambridge offices and it’s great to see Arm invest in their offices in the city too, which further demonstrates Cambridge’s status as a hub for global companies.”

Arm’s expansion comes as Japanese telecommunications company Softbank Group closes in on a £24bn takeover of the British technology giant.