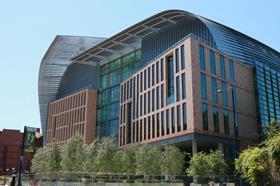 The firm’s project director said close to 45% of the 980,000 sq ft building had been manufactured offsite through its Design for Manufacturing Assembly (DfMA) facility which is based at Steetley in Derbyshire.

The institute’s 1,500 plus staff, including 1,250 scientists involved in biomedical research, will start to move into their new home within the next month.