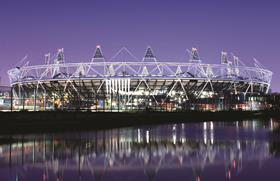 Building envelope specialist Lakesmere has been appointed to re-roof the London Olympic stadium.

The firm will work for main contractor Balfour Beatty and architect Populous to replace the existing fabric roof.

Lakesmere will be required to ensure the acoustic performance of the new roof to reduce noise from the stadium’s PA system’s effect on nearby residents and businesses.