L&G modular to take on 350 staff this year

Insurance giant L&G has committed to hiring 350 new staff this year at its modular housebuilding plant in Sherburn-in-Elmet near Leeds as it finally looks to expand the operation after a series of false starts.

The business said it had begun construction on its biggest scheme to date, the 185-home Bonnington Walk scheme in Lockleaze, Bristol (pictured) which it is developing in partnership with the city council. 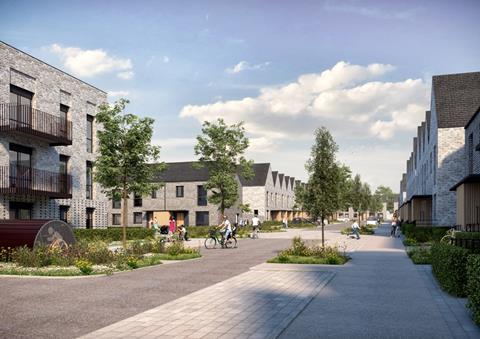 The news came as L&G published full-year results earlier this week for 2020 which showed that the division responsible for its housing businesses, LGC, fell to a £24m pre-tax loss, after making almost £500m of profit in 2019.

The scaling up of the modular business also came as the firm reported strong progress in growing its new affordable housing arm, set up in 2019, with 670 homes now built compared to just 117 in the first year.

L&G said the modular housing business, first launched in 2016, now had a growing pipeline of work and was ready to support “the UK’s bounce back post covid-19”.

The business had originally planned to have the factory up and running in six months, but subsequently reported teething problems and has since reported more than £100m of losses over four years at the subsidiary.

The progress at the modular business came as the coronavirus crisis halved operating profits in LGC’s direct investments following the shutdown of housebuilding sites in the spring lockdown.

Operating profit from direct investments – which includes LGC’s ownership of housebuilder Cala – fell to £112m from £217m in 2019 “as a result of a pause in traditional housebuilding activities during the UK lockdown”.

This drop in profit was further impacted by a £299m writedown at LGC, which also includes investments into green energy and commercial real estate, which the firm put down to in part to “early stage development costs” and a revaluation of assets in the portfolio. Together these led to the £24m pre-tax loss at LGC.