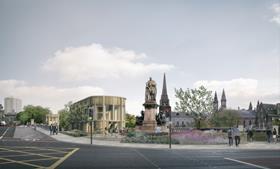 The firm behind the £20 million facelift for Aberdeen’s Union Terrace Gardens (pictured), which is set to start this autumn, said it had not opened a new office since its Glasgow operation, which is masterminding the Aberdeen job, opened five years ago.

The firm will use some of its current 145 staff to run the new sites, adding to the workforce as the latest additions develop.

LDA said it has already worked on projects in Cambridge including the city’s Science Park while Bristol was one of the country’s fastest growing cities. It added it was eyeing opportunities in Manchester from the government’s Northern Powerhouse initiative.

As well as Glasgow, the firm has offices in London, Exeter, Peterborough and Oxford.