Designer of the Olympic Park to masterplanner energy-generating lagoon project in Swansea. 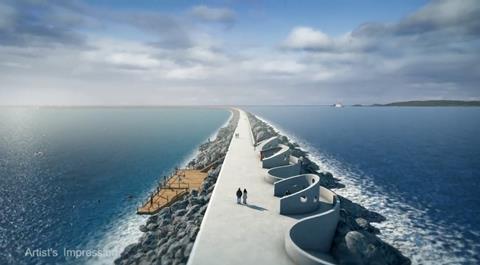 LDA Design, the designer of the Olympic Park, has been appointed masterplanner and landscape architect for a man-made energy-generating lagoon project in Swansea.

Under the proposals, the lagoon would offer 250MW of installed tidal power capacity with a capability of 16 hours’ generation every day.

It would produce enough electricity to power around 107,000 homes, and create savings of over 200,000 tonnes of CO2 annually.

LDA Design will masterplan both sea and landside areas.  On the seaward side, the work includes the establishment of new lagoon walls which will capture an area of water that will form the focus for a dynamic public realm, including new beaches and water-based leisure areas.

The visitor centre offers community benefits, such as education, arts, culture, recreation and sporting opportunities, to help showcase the project and explain its benefits and contribution to energy production.

Alex Herbert, head of planning for Tidal Lagoon Power Limited said: “We are pleased to have appointed LDA Design on the project as they bring experience in both the Development Consent Order process as well as design excellence through recent projects, including the London 2012 Olympic Park and some of the UK’s greatest seafront resorts.”

Alister Kratt, partner at LDA Design, said:  “We are masterplanning a new public realm and facilities along an area of seafront that has been cut off from the public for over a century. This project holds the potential to act as a catalyst for the continued regeneration of the Swansea Bay City region.”