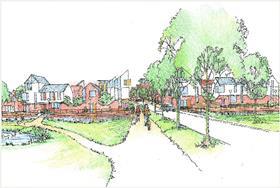 Work on a 4,000-home scheme near Leicester will start next month, after the government agreed a £9.4m loan to the developer.

The New Lubbesthorpe scheme will provide 4,200 homes, plus shops, schools and a health centre.

The money comes from the government’s large sites infrastructure fund, which supports projects that stalled or were mothballed during the 2008-09 recession.

The loan will go towards a new road bridge across the M1 motorway, a primary school and a new park.

The proposals for New Lubbesthorpe have already been granted planning permission.

Housing minister Brandon Lewis said: “The 2008 housing crash led to the loss of a quarter of a million construction jobs, leaving sites abandoned and homes no longer being built.

“That’s why we put housebuilding at the heart of our long-term economic plan, and today’s £9.4m deal will mean work can get going at New Lubbesthorpe.”