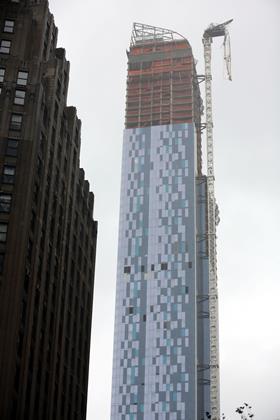 Lend Lease is working with engineering experts to try to secure a crane high above New York which has become severely damaged by Hurricane Sandy.

Yesterday evening dramatic pictures of the crane emerged which showed its boom hanging perilously from the top of the under-construction One57 building, which is close to Central Park in Manhattan.

The images have been trending on Twitter, tweeted by celebrities including Donald Trump and Piers Morgan.

The contractor told Building this morning that the streets beneath the tower have been evacuated and that it is working with structural engineers and the City’s Department of Buildings on “evaluating any additional measures that can be taken to secure the boom and crane structure”.

A spokesperson said the damage had occured at around 2.35pm (New York time) yesterday.

She added: “The hurricane storm winds pushed the crane boom over the cab section of the high rise crane at One 57th Street. There have been no injuries.

“Safety is paramount at Lend Lease and our thoughts are with our colleagues in the US and everyone affected by Hurricane Sandy”.

The One57 building is set to become one of New York’s tallest skyscrapers. It is a luxury condominium and is designed by Pritzker-prize winning architect Christian de Portzamparc and developed by Extell Development Company.