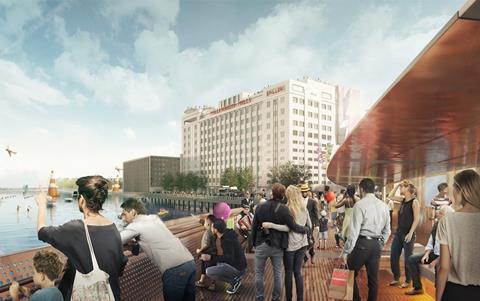 Lendlease has teamed up with US private equity firm Starwood Capital to take on the development of the 62-acre Silvertown Quays mixed-use scheme.

The scheme in east London’s Royal Docks was being developed by Client Silvertown Partnerships – a consortium of Chelsfield Properties, First Base and Macquarie Capital.

Being built on land sold by the Greater London Authority in 2012, the aim was to deliver 7 million sq ft of development, including a commercial quarter and 2,500 homes, opposite the Excel Centre exhibition centre.

The consortium had decided to sell its interest in the project and talked to a number of interested parties, including Essel Group, owned by Indian billionaire Subhash Chandra, before settling on the Lendlease/Starwood Capital combination.

Dan Labbad, chief executive of Lendlease’s international operations, said the partnership with Starwood Capital planned “to create a place that’s innovative and environmentally sustainable, and will provide tangible benefits for the local community for the long-term”.

Last year it was revealed that Aecom had been awarded the contract to build up to 3,000 new homes during the development’s first £500m phase.

Founded in 1991 and managing more than $50bn of assets Starwood owns a number of property interests, including the De Vere hotel group in the UK.