But Haringey says its agreement was conditional and only owes contractor £500,000 for half the costs 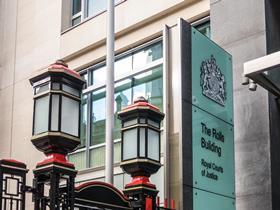 Lendlease has begun the legal action it threatened against Haringey council, which over the summer scrapped the controversial £2bn housing plan the pair signed last year.

The north London borough voted in July to bin the Haringey Development Vehicle (HDV), a joint venture created by the previous Labour administration, which planned to build around 6,000 homes.

In the aftermath of the vote, Lendlease’s chief executive of Europe, Dan Labbad, put the authority on notice it would look to recoup costs and compensation.

[The council] was unjustly enriched at the claimants’ expense

Now, in papers lodged with the Technology and Construction Court (pictured), Lendlease has said the council’s decision was “unlawful” and was “in breach of the fundamental duties of equal treatment, transparency, non-discrimination, proportionality, legitimate expectations and administration”.

It added that it had an “enforceable legitimate expectation that in the event of abandonment they would be reimbursed by the defendant in respect of expenditure that was incurred in respect of the HDV subsequent to Lendlease’s appointment as the preferred bidder”.

The nine-page claim says it has not been reimbursed and that the council “was unlawfully/unjustly enriched at the claimants’ [Lendlease’s] expense”. The papers do not specify the amount of the claim.

But Haringey council said the pair had struck a deal which capped at just over £500,000 the cost of compensating Lendlease in the event of the deal being pulled.

It added: “There was an agreement or understanding between the parties that, in the event the project did not proceed, [Lendlease] would be reimbursed for 50% [of costs …] the total amount of which was £1,040,550.”

The council denied any wrongdoing in its decision-making process and any allegations of breaches of its legal duty.

In its 10-page defence, it said it had the authority to scrap the deal as it had laid out terms in the conditions of its procurement process.

The council said the conditions of procurement stated: “The authority [ie the council] reserves the right at any time […] not to award a contract.”

It also said it was stipulated that the council “reserves the right […] to cancel or withdraw from the competitive dialogue procedure at any stage”.

The council also said it had made it clear that no offer or final tender was deemed accepted until all contract documents had been duly executed and declared unconditional.

The new Labour council, backed by the Momentum activist group, fought the local elections in May on a manifesto that included a commitment to scrap the HDV, which proved controversial with opponents claiming it would price residents out of the borough.