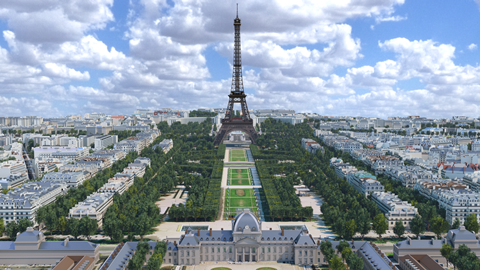 A team led by Amanda Levete’s practice AL_A is one of four shortlisted for a scheme to revamp a stretch of land around the Eiffel Tower in Paris ahead of the city’s stint as host of the 2024 Olympic Games.

The architect behind the V&A’s Exhibition Road Quarter scheme in Kensington has teamed up with a group of engineers and consultants, including Gross Max and Ricky Burdett, the chief adviser on architecture for the London 2012 Olympics, for the high-profile contest.

More than 40 teams entered the competition with the City of Paris set to unveil a winner next year.

The work involves working mainly on parkland around the tower with completion due in 2023. The site is expected to host the 2024 Games’ beach volleyball competition.

Autodesk is partnering with the City of Paris to reimagine the Eiffel Tower landscape. Autodesk has used Building Information Modelling (BIM) to create the largest urban model of its kind worldwide, complete with buildings, roads and infrastructures, pedestrian zones and crossing, urban furniture and green areas.