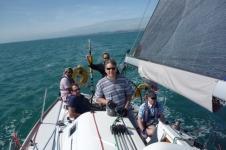 As the Weightmans team finally hit the water together with only two weeks to go, some wonder if this was all such a good idea…

Week 4: first day together on the water

It was with some trepidation that the Weightmans sailing team embarked on its first proper training day all together as a team last weekend. A full year since many of us had set sail and with some new additions to the team, we were beginning to wonder whether we had made a mistake in taking on the annual four-day sailing challenge for the construction industry, the Little Britain Challenge Cup.

The action starts on 10 September, so last weekend was a chance for the team to meet up and practise our moves in preparation for the big weekend itself. We headed off to Brighton marina and set sail on board a yacht called Danny with our professional instructors Steve and Buster.

Most members of the team rapidly recovered their rusty sailing skills from last year, and even those who were braving the water for the first time, such as our head of professional risk here at Weightmans, Mike Grant, pretty quickly picked up the necessary skills - if not the terminology.

A full year since many of us had set sail and with some new additions to the team, we were beginning to wonder whether we had made a mistake

So, for those of you who can't tell your port from your starboard, here are a few helpful definitions of some of the more obscure sailing terminology:

We can get on to tweakers and wangers (or wing-wangs) in later episodes!

One of the things we wanted to achieve with the training day was a dry run to allocate places and jobs for each member of the team before the big weekend itself. Sticking to a tried and tested formula, we decided to keep things as similar to our previous year's experience as possible.

This means Ed Lewis once again taking up his position as bowman, me leading at the helm and Quentin Fox, a professional risk partner here at Weightmans, taking a sideways promotion and now finding himself responsible for navigation and spinnaker packing (which involves spending quite a bit of time below deck and therefore is likely to also include the vital tasks of tea-making and ginger biscuit preparation).

Everybody's roles allotted and with nobody thrown overboard, we considered the day a roaring success and retreated to the Master Marina tavern to enjoy a few cold drinks and a full debriefing. Feeling much more confident about the competition, we'll be cranking up the practice runs at every space moment we get!