Liverpool presses ahead with Anfield revamp 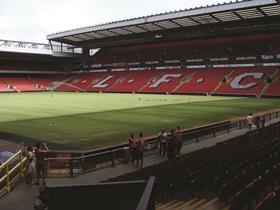 Liverpool Football Club has put forward plans for the £260m regeneration of the Anfield area of Liverpool to the city’s council.

The plans include proposals for new housing, business, retail, a hotel, more public space and the extension of two stands at Anfield stadium to increase capacity from 45,000 to 60,000.

The plans are laid out in a document called Anfield Spatial Regeneration Framework (SRF) and could be formally adopted as a supplementary planning document, subject to Liverpool City Council approval.

Liverpool FC said the document had taken into account local residents’ and businesses’ views and was an important step towards planning applications for the various elements of the scheme being submitted.

The club reaffirmed its commitment to extending Anfield stadium by 2018.

Liverpool City Council’s cabinet will consider the proposals on February 7. If approved in draft form, a four-week public consultation will take place before it is finalised and submitted to the cabinet again for official and final adoption in April.