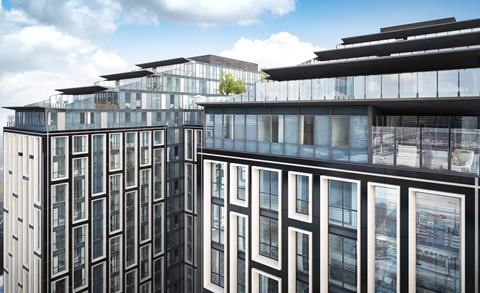 Leach Rhodes Walker’s plans for a 16-storey development overlooking the Liverpool waterfront have been submitted for planning approval.

The Manchester-based practice has drawn up the scheme on Strand Street, which runs alongside the river Mersey, for a joint venture between Patten Properties and Panacea Property Development.

The scheme involves the demolition of Strand House, an early 1990s office block which currently occupies the site of the proposed development that is located between the waterfront and Grosvenor’s Liverpool One shopping mall.

In its place, the JV is proposing to a 16-storey development including three additional storeys that step back from the main elevation.

The scheme contains 395 flats with private roof terraces at the upper levels. The ground floor will house restaurants, bars or cafés.

The scheme features design elements and materials, which reference neighbouring waterfront buildings, such as stone cladding that echoes the Three Graces buildings on the city’s Pierhead.

Commenting on the plans, Neil Patten, managing director of the JV companies, said: “It is vital that our design is sensitive to the heritage of Liverpool’s historic waterfront and is more suitable in terms of scale and appearance than the existing, and somewhat dated, office block currently on the site.

“This is a key transition point between historic buildings and more modern developments within the Albert Dock, Liverpool One and the City centre, so we’ve looked to tie these areas together.”

The application has been submitted by planning consultant Zerum, supported by public affairs company Curtins.