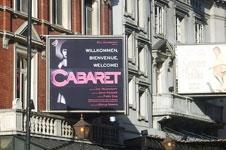 A scheme to transform London theatres into sustainable showcases has been launched by Boris Johnson.

London theatres create 50,000 tonnes of carbon emissions every year – the equivalent of emissions from 9,000 homes.

‘Green theatre’ is designed as an action plan for the theatre industry, outlining practical and effective measures to reduce energy use in buildings while also saving money in energy bills. Johnson said that the plan could cut carbon emissions by almost 60% by 2025.

Measures highlighted in the plan include designating “green” responsibilities to staff and writing 'green' policies into contracts to ensure that suppliers are also helping to cut emissions.

Mayor of London Boris Johnson said: “London’s theatres make a vital contribution to the capital’s economy and its productions and venues are renowned worldwide. The power of the theatre industry to set an example in the fight against climate change is immense.

"I am fully committed to reducing the capital’s emissions by 60% by 2025 and forward-thinking contributions such as “Green Theatre” will inspire many industries to help us meet this target together,” he added.