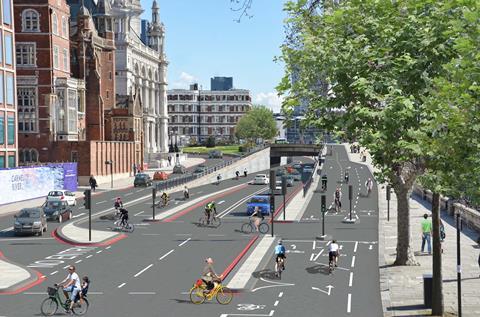 The Mayor of London Boris Johnson has given the go-ahead for construction of a system of segregated cycleways in the capital, dubbed ‘Crossrail for bikes’.

Construction on the scheme, which is part of City Hall’s £913m investment programme for cycling, will begin in March, subject to approval by the TfL board next week.

The route is expected to open in 2016 and will run for more than 15 miles through central London, the western suburbs and Barking.

As Europe’s longest substantially-segregated urban cycleways, it will have two continuous cycle routes, almost completely separated from traffic, crossing central London from east to west and north to south.

The Mayor, Boris Johnson, said: “We have done one of the biggest consultation exercises in TfL’s history. We have listened, and now we will act.” He added that traffic delays along the route will be cut by 60% over previous proposals.