The firm has been appointed by local developer Astrea to build a nine-storey block designed by Piercy & Company.

It follows a string of planning wins in the historic 18th century square, which includes a grade II-listed gardens planted with London’s oldest plane trees. 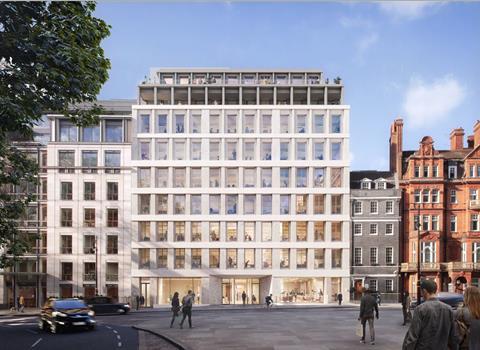 In January, Astrea was given the go ahead for refurbishments of two separate buildings at 50 Berkeley Street and 50 Stratton Street, both designed by Stiff and Trevillion.

And in November, architect AHMM was cleared for a £200m redevelopment of Lansdowne House at the southern end of the square for developer CO-RE.

Mace’s latest scheme at 38 Berkeley Square, which will require the demolition of an existing eight-storey office block built in the early 1950s, is set to provide 85,000sq ft of office space.

It will also provide 9,000sq ft of retail space on its ground and lower floors, with construction set to complete in early 2024.

Mace said the scheme will aim for a BREEAM Outstanding rating and will take measures to minimise carbon emissions during both the demolition of the existing structure and construction of the new building.