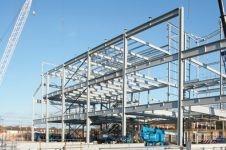 Construction management specialist Mace is set to take over construction on the collapsed £200m Trinity Walk shopping centre project in Wakefield, West Yorkshire, that was begun by Shepherd Construction.

The appointment is likely to end hopes that Shepherd, which was left £15.5m out of pocket when the scheme went into administration in March, will get its money back.

Graeme Chalk, head of project management for Centros, the scheme’s new development manager, confirmed he was talking to Mace about taking on a construction management role.

Chalk said Centros had been employed by the scheme’s backer, Anglo Irish Bank, to look at ways to recoup the £62.5m it lost on the project.

Anglo Irish has “first call” on profits from the development, with Shepherd only benefiting when the £62.5m and a further £5.7m bank loan to Corovest Capital is recouped.

However, two separate sources said there was no chance of the scheme making this money back in the current market. One said of Shepherd: “It doesn’t have a cat in hell’s chance.”

Chalk declined to say exactly what Mace’s role would be. He said it was possible new planning permission would be sought for the scheme, admitting that the firm was considering building a supermarket on the site, rather than the retail-led regeneration scheme envisaged.

He said: “Whether we need a new planning application depends on how much the scheme changes. We are working with all stakeholders to see how to take it forward.”

A spokesperson for Shepherd, said the firm was unable to discuss the details of the scheme before a meeting with the banks next week. Mace declined to comment. Administrator KPMG was not available for comment.