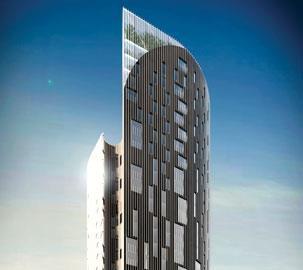 Make Architects has been removed from a £100m scheme to build a 30-storey tower in Manchester’s Spinningfields district, writes Dan Stewart.

The tower is to contain a luxury hotel and 200 private apartments. Make’s designs for it (pictured) were unveiled in January, but developer Allied London has confirmed that the practice is no longer involved.

Stuart Lyell, development director of Allied London, said: “We appointed Make Architects to do some concept designs and we are now in discussions with a number of architects over how to take it forward.”

It is unclear why Make is no longer on the project, but a source close to the scheme said development on the tower had been slowed by the credit crunch.

He said: “It wasn’t so much what Make did, but more to do with the market. There’s a downturn in the number of tenants taking up space in buildings like that and [Allied London] isn’t cash rich enough to develop them itself.”

Lyell dismissed suggestions that the scheme had been hit by the poor state of the market. He said: “We are progressing with the scheme and will move it on when appropriate. There’s a real lack of four and five-star hotels in Manchester.”

It is the latest in a series of blows to Make, the practice set up by Ken Shuttleworth after his departure from Foster + Partners four years ago.

The practice has been particularly badly hit by the credit crunch, with several high-profile projects put on hold in recent months. These are understood to include the Spiracle tower in Leeds for developer HBG Properties, the NoHo Square development in Fitzrovia, central London for Candy & Candy and a proposed residential tower in the athletes’ village for the 2012 Olympic Games.

• Atkins has cut 51 jobs from its design division as part of a reorganisation of its business. The cuts were made at four offices in Winchester, Aberdeen, Cambridge and Nottingham. A spokesperson denied that the reorganisation had been caused by the credit crunch.

For more on Make go to www.building.co.uk/archive