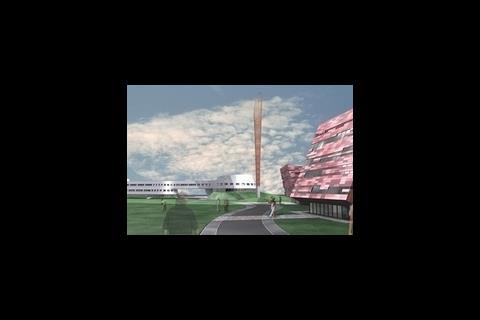 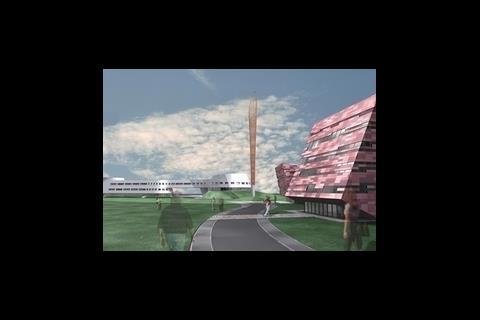 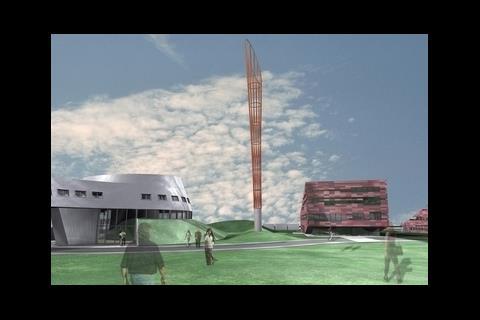 Erection will be completed today of the UK’s tallest piece of freestanding public art – architect Make’s Aspire sculpture for the University of Nottingham.

Ken Shuttleworth's practice has created Aspire as a centrepiece for the new buildings it has designed for the university’s Jubilee campus, phase two of which is under construction.

Shuttleworth said: “Creating a sculptural form on this scale and for this setting has been a fascinating design challenge.”

At 60m high, Aspire will be three times as tall as the Angel of the North at Gateshead and 8m taller than Nelson’s column in Trafalgar Square.

Its total height comprises an 8m concrete column topped by a 52m steel mast. The mast, which weighs almost 50 tonnes, is made of 1,250m of hollow, 140mm-diamater steel tubing, formed into a lattice design that transfers loads efficiently down to the ground.

The tubes are painted in tones of red to harmonise with the terracotta-tiled cladding of Make’s new Amenities Building and International House on the campus.

The sculpture, which is taking two days to erect using a 300-tonne crane, will be lit up during the hours of darkness and is meant to represent academic ambition.

The university’s vice-chancellor, Professor Sir Colin Campbell, said: “It sends a message to everyone that no matter where they come from, they can achieve great things.”

Paid for by an anonymous donor, the £800,000 landmark sculpture was commissioned by the university as part of the 60th anniversary celebrations of the granting of its royal charter. It will be officially unveiled on 14 July.

Structural consultant on the project was Millward Partnership and project manager was Wilson Large & Partners, both from Nottingham.