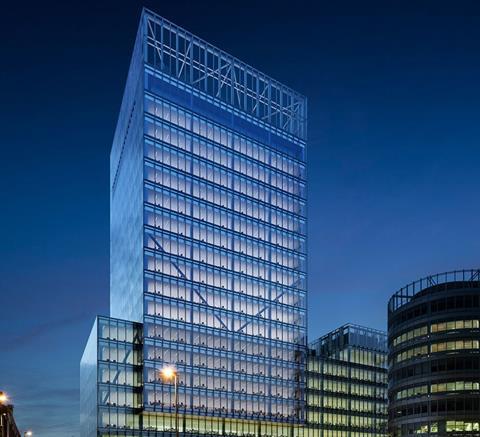 A 20-storey office block designed by Ian Simpson Architects is set to be granted planning permission by Manchester council today despite opposition from English Heritage and a conservation advisory panel whose members include architects.

The scheme, No 1 Spinningfields, involves the demolition of the eight-storey 1960s office block Quay House, on Quay Street, in the city centre, and its replacement with the 121 metre-tall Simpson-designed structure..

Despite supporting the replacement of Quay House, English Heritage said the Simpson scheme should be rejected as it would “have a harmful impact” on the settings of several heritage assets, including grade II*-listed Cobden House, Sunlight House, Royal London House, the Opera House and on three nearby conservation areas.

It called on developer Allied London to focus its efforts on a 10-storey alternative scheme referred to in documents submitted alongside the planning application.

Manchester Conservation Areas and Historic Buildings Panel said the development would be “highly visible” in the St John Street Conservation Area – which is home to Cobden House – resulting in “a highly unfortunate impact on the character of this area”.

The group said the proposals also lacked “a sense of rhythm” with the street scene that the existing Quay House possessed.

“The proposed building requires two faces – one towards the more historic environment across and along Quay Street and the second towards the larger-scale, highly contemporary Spinningfields area,” they said.

“Currently the proposal responds only to Spinningfields although even here it would be substantially ‘over-scaled’ compared to the recent Spinningfields developments and would make adjacent listed buildings appear somewhat insignificant.”

City council planners accepted that the construction of the new development would affect the setting of Cobden House, but insisted “its heritage value could still be appreciated and understood” and recommended it for approval.

They said the block would complement the local “high standard of design” and would redevelop a key city-centre site that was currently under-used.

“The development would help to create a dynamic and vibrant streetscape and would enhance its sustainability as a whole, as well as improving the settings of the surrounding heritage assets,” they said.

Officers added that the the cantilever proposed for No 1 Spinningfields would open up new views of Cobden House.

Predominantly clad in glass, the main structure will provide office space, along with ground-floor retail and restaurant uses, and a restaurant and double-height terrace on its 18th floor.

An eight-storey component of the development to the west is earmarked to provide ground- and mezzanine-floor retail space, and will have a bay that cantilevers over the structure’s double-height ground-floor level on Quay Street. 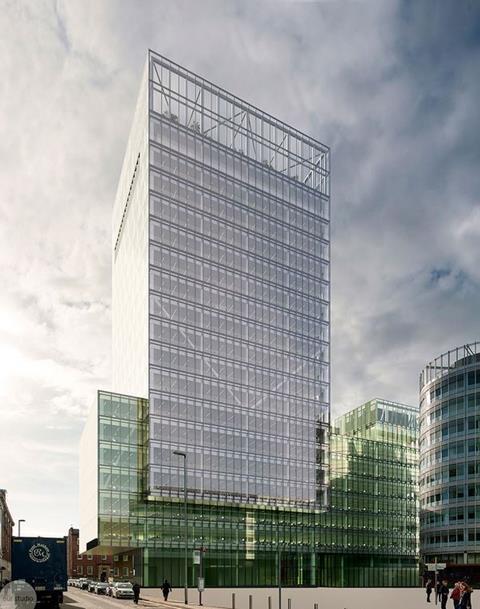