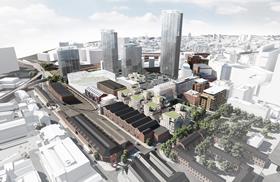 The first phase of Allied London and Manchester City Council’s development in St John’s has been green lit, with work expected to begin in autumn 2016.

The planning consent for the first phase includes the redevelopment of ITV’s former Granada studios and Coronation Street buildings.

The phase incorporates a Levitt Bernstein-designed hotel with a rooftop pool, cinema and roof terraces, plus South Village - part of The Villages designed by Simpson Haugh & Partners -comprising workshops, workspace, retail and 60 apartments, as well as the Bonded Warehouse designed by Buckley Gray Yeoman, to provide workspace.

Allied London’s chief executive Michael Ingall said: “Allied London has long been championing Manchester and are fully supporting the Northern Powerhouse initiative, which now even has its own elected Minister in the Houses of Parliament. It is a mission of the utmost importance.”