Bad weather helped send construction output into reverse for the second consecutive month, ahead of warnings the ongoing materials and skills shortages will see more falls in the months to come.

May’s downpours were blamed for contributing to an 0.8% fall in the month – although the ONS’s latest GDP figures said the sector’s output was still 0.3% above the February 2020 pre-pandemic level. New work fell 0.3% and repair and maintenance slumped 1.6%, the ONS added.

It said anecdotal evidence from businesses suggested torrential downpours in May was also a contributing factor for the dip. By the middle of the month, much of the UK had already seen close to, or more than, its average rainfall for the month.

But in the three months to May, output grew 6.3% compared with the previous three-month period, with increases in both new work and repair and maintenance of 6.6% and 5.8% respectively.

It said a 6.6% increase in new work was because of growth seen in all sectors, with the largest contributors being private housing new work and infrastructure, which grew by 7.4% and 9.7% respectively. Repair and maintenance was up by 5.8% during the same period. 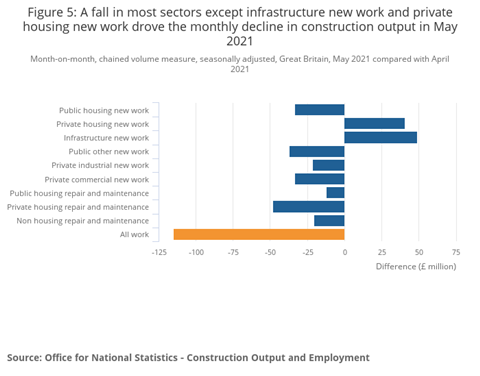 But the decline in output in May was seized upon as further evidence that construction’s recovery is stalling because of materials shortages and access to labour which has dwindled since the UK left the EU at the start of the year.

Scape chief executive Mark Robinson said: “The shortage of materials and skilled workers is clearly beginning to take its toll, reducing the sector’s resilience and risking its capacity to keep pace with the growing demand created by the economic recovery.

“Expanding the trades which are on the government’s shortage occupation list will be a strong first step to easing the pressure.”

And Fraser Johns, the finance director of regional contractor Beard, added: “Collaboration with suppliers and customers, and a proactive approach to procurement across the whole industry, is going to be vital this summer especially with concerns over labour shortages as foreign workers depart for the season. Without that, the blip we saw in May threatens to become a much bigger problem later on in the year.”

Others warned that more jobs could be hit by hold-ups as remaining lockdown restrictions are eased on 19 July with commercial schemes particularly at risk.

Clive Docwra, managing director of consultant McBains, said: “With commercial construction work expected to continue to pick up as offices return over the next few months, this materials shortage could also mean a bottleneck in the supply chain that means more projects may be put on hold, putting any revival at risk.”

Earlier this week, the latest monthly figures from the IHS Markit/CIPS survey said construction output hit a 24 year high in June, driven by a booming housing market and a recovering commercial sector.

But the CIPS data underlined the problems many are now facing over materials and labour shortages with the problems sending business confidence in construction to a six-month low.

It said concerns about access to materials meant June was the worst ever for supplier delays since the survey began in April 1997. And it found that worries over materials price hikes and access to labour are starting to take effect with subcontractors now factoring in the rises, meaning the prices they charged jumped by the steepest amount since records began.