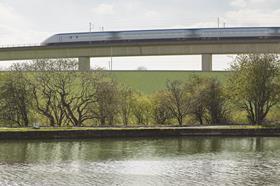 Sir Robert McAlpine is targeting expansion into civils and growing its public sector work after posting another heavy loss for 2015.

The heavyweight contractor posted a pre-tax loss of £52.2m for the year to October 2015, slightly reduced from its £54.8m loss the previous year. Revenue dropped to £782.1m, down from just over £1bn.

Sir Robert McAlpine blamed the latest loss on a “small number of legacy contracts” won during the recession which “deteriorated further” over the year.

But the firm said the worst performing of these jobs had now completed or were “very close” to completing, and consequently the firm was “confident” the construction business would return to profit in 2016.

The firm, under its first ever chief executive Tony Aikenhead, who took on the role in November, is rolling out a new strategy targeting expansion into civil engineering and expanding the firm’s public sector and frameworks work.

The firm has launched a civil engineering business with the aim of supplying 20% of its turnover by 2019.

The contractor is shortlisted for four packages of civils work for HS2 as part of its Align joint venture with Bouygues and VolkerFitzpatrick.

Sir Robert McAlpine expects turnover overall to grow, supported by growing the proportion of workload it gains from frameworks and the public sector.

In response to the hot market in central London, the firm is backing out of the high-end residential market and said it “will no longer enter into fixed price contracts in the residential fit-out subsector”.

Aikenhead said: Tony Aikenhead, Chief Executive of Sir Robert McAlpine Ltd, said, “I am very positive about our future prospects and I look forward to the business returning to profitability in 2016.

“I am confident that, alongside our continued focus on our clients, our new strategy combined with a firm focus on productivity, engineering excellence and first class delivery will have significant impact as we continue to realise our company vision of ‘Proudly Building Britain’s Future Heritage’”.