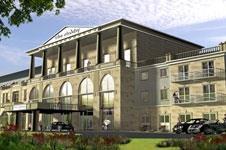 Consultant McBains Cooper has been appointed by Skelwith Leisure for the £100m luxury hotel The Flaxby in North Yorkshire.

The scheme will be set within the grounds of a 27-hole golf course spanning 300 acres and will be the largest development of its type in the North of England.

McBains Cooper is providing cost management and employer's agent services to the scheme.

Located just off the A1, between York and Harrogate, the luxury development will include several hundred rooms, a spa and a number of restaurants.

It also offers rooms for sale to investors and a large portion of the rooms has already been sold. The group has set up a self-invested personal pension (SIPP) scheme as a tax-efficient way of investing.

David Dodd, director at the consultant's Leeds office, said: "There are still a lot of opportunities within the regional markets which The Flaxby demonstrates."

Work is scheduled to start in summer 2009 with completion expected in 2011.