McGee has been appointed to carry out the first phase of a major redevelopment of media group Thomson Reuters’ former base in Canary Wharf.

The demolition specialist has been picked to carry out the soft-strip, structural demolition, facade removal, enabling and structural strengthening works to the steel frame building at 30 South Colonnade. 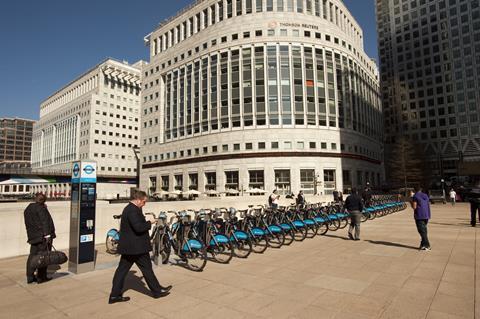 The building is 30 years old this year

The 13-storey building, which opened in 1991, was designed by KPF and underwent a Perkins + Will-designed makeover in 2010 ahead of Reuters taking up the space. But Reuters has now taken out a lease at 5 Canada Square, elsewhere in Canary Wharf.

The works includes the removal of two storeys from the 62m tall building, above the 11th floor slab while keeping the existing floor slab intact. Architect on the redevelopment is Buckley Gray Yeoman.

The project is being carried out for developer Quadrant, which acquired the building in May 2019 in a joint venture with US investor Oaktree.

The project is targeted for practical completion in June 2022.