McGee has started demolition work on Sampson House, the former data centre which occupies the site of a mixed-use development designed by PLP on the south bank of the River Thames.

The brutalist building (pictured), designed by the Fitzroy Robinson & Partners, now Aukett Swanke, was originally a cheque-clearing station for Lloyds Bank when it opened exactly 40 years ago, before later being leased to US computing giant IBM as a disaster recovery facility and data recovery centre. 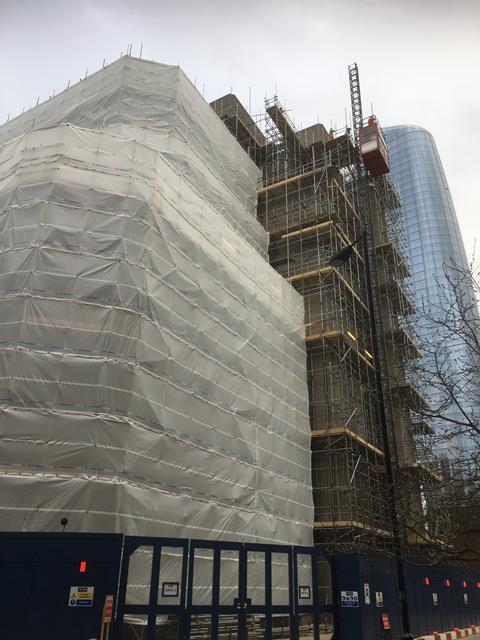 The 1970s building will make way for a multi-tower development

The £1bn scheme for a consortium featuring UK developer Native Land, Malaysian investment group Amcorp, Singapore-based investment firm Temasek and HPL Properties, also based in Singapore, will see nine high-rise blocks built on the site of Sampson House, which occupies the eastern flank of the Thameslink railway viaduct, and part of the same scheme as the now-demolished Ludgate House, the former home of Building and the Daily Express, on the western side.

The scheme secured original planning approval back in 2013.

On the Sampson House site, five replacement buildings will range from seven to 34 storeys, providing 341 residential units and an office building.

The southern approach to Blackfriars Bridge is expected to see a slew of new towers in the next couple of years, including a 53-storey block designed by Stirling Prize-winning architect Wilkinson Eyre.