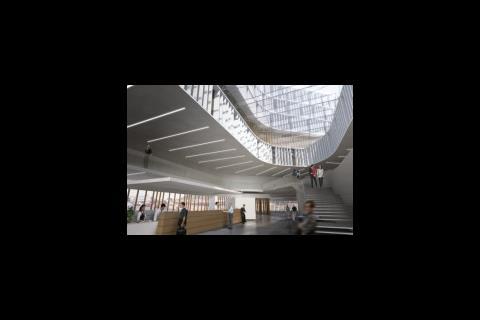 Metropolitan Workshop and Arkitektkontoret Vardaal-Lunde's winning design for a conference and exhibition centre at Solheimsviken in former dock buildings at Bergen, Norway 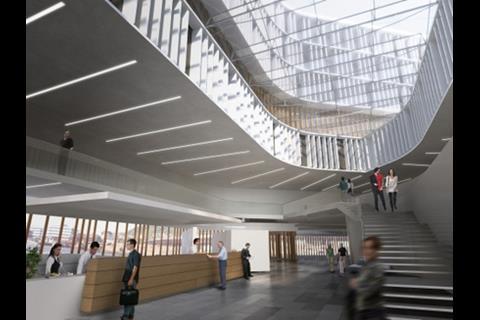 Metropolitan Workshop and Arkitektkontoret Vardaal-Lunde's winning design for a conference and exhibition centre at Solheimsviken in former dock buildings at Bergen, Norway

Metropolitan Workshop and Arkitektkontoret Vardaal-Lunde have won an invited competition to design a new conference and exhibition centre with a hotel to be built at the old shipbuilding docks of Bergen, Norway.

The redevelopment is being undertaken by GC Rieber, Scandinavia's largest developer and will form the centrepiece of the Solheimsviken regeneration area, with close links to a new tram line under construction.

The 30,000m2 project includes a 240-bed five-star hotel surrounded on all sides by water, with large areas of new waterfront terraces and boardwalks featuring restaurants and cafés.

The 6,000m2 building that will house the exhibition and conference centre, which will also provide major office space, is designed on an industrial scale to recall the site's former shipbuilding sheds.

Neil Deely, director of UK-based architect and masterplanner Metropolitan Workshop, which also includes the Tripoli Museum of Conflict among its projects, said: “The team has proposed a new canal to lie between the two buildings bringing water into the site which will allow boats to be moored directly alongside the conference centre. The contrasting architectures of the two buildings will recall the volumes and shapes of the industrial activities once present on the site.

Osmund Lie, director of Arkitektkontoret Vardaal-Lunde, said: "This is a key project for the future of Bergen - There are huge ambitions for the transformation of the area and this project will become the centre piece of the district.”