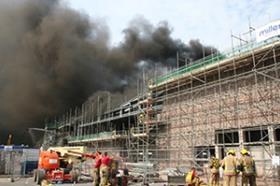 A firearms training centre being built by Miller Construction in Somerset remains ablaze more than five days after a major fire began.

The fire at the £16m Black Rock centre in Portishead, near Bristol, was spotted by a passing police officer early last Tuesday.

The following day, an anarchist group calling itself Angry Foxes Cell claimed responsibility for the blaze and linked its actions to badger culling.

Around half of the building is understood to have been destroyed with major sections of the roof having collapsed.

Matt Hunt, group manager at Avon Fire and Rescue Service, told the BBC “small pockets” of fire were still burning within the rubble of the building but predicted these would be put out completely early this week.

He added that this would allow investigators from the fire service and Avon and Somerset Police to enter the building once it had been made safe by contractors.

Police say it is too early to decide “cause or responsibility”.

The facility, which will contain two indoor firing ranges as well as classrooms, had been due to open in January.

It is part of a PFI deal, worth more than £100m, which will also involve other police stations and operational facilities in the local area.