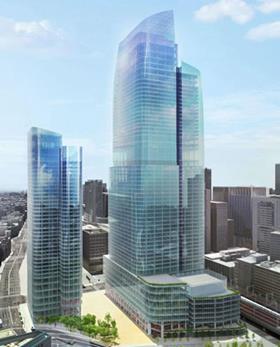 The tower is one of three structures which will form a new heart of Tokyo’s financial hub.

Mitsubishi Estate President Hirotaka Sugiyama hoped the tower could improve the city’s standing as a financial centre. He said:
“I want this building to be as symbolic and as competitive [as other landmark buildings] in the world,”

The planned construction site in the Tokiwabashi area of Chiyoda Ward encompasses more than 30,000 square meters and is currently occupied by the HQ of JX Holdings Inc, as well as the Nippon Building.

If given the go-ahead the tower would complete in 2027.