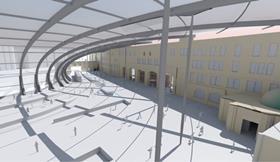 The project will see contractor install a huge ETFE roofing canopy, similar to that used at the Eden Project, across the station concourse as well as carrying out other improvements including reconfiguration and refurbishment of the concourse and the provision of a new link bridge to the MEN Arena.

Morgan Sindall is understood to have beaten off competition from Kier for the Network Rail project, which is being funded by Network Rail and Transport for Greater Manchester.

The BDP-designed scheme is aimed at preparing the station for the electrification of the line to Liverpool, as well as taking into account improvements planned under Network Rail’s  Northern Hub upgrade plans.

Construction is scheduled to begin shortly, with completion by the end of 2014.