Morgan Sindall’s regeneration arm has struck a deal with Lambeth council to develop a £135m scheme across three sites in Brixton, south London. 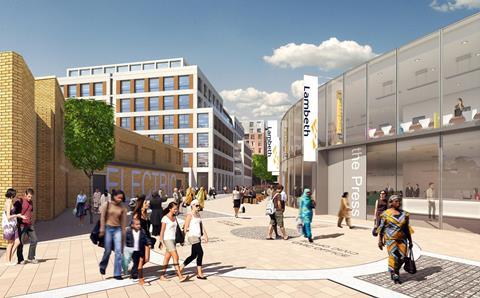 Morgan Sindall said today that Muse Developments had signed a development agreement with Lambeth council for the £135m regeneration scheme, which is focused on Brixton town centre.

The Your New Town Hall (YNTH) project involves preserving the historic town hall building; delivering a new energy efficient office building for the council of up to 125,000 sq. ft; creating commercial space for start-up businesses and community groups; and up to 275 new homes.

As part of the scheme, Lambeth Council will be able to reduce its core office buildings from 14 to 2, saving at least £4.5m a year.

Muse Developments was chosen as the preferred developer for the YNTH project late last year.

The signing of the agreement means Muse can now press ahead with the detailed design of the project and carry out widespread consultation with Lambeth residents.

Morgan Sindall has been appointed as principal contractor on the scheme.

Michael Auger, development director at Muse Developments, said: “We are very excited to be on board with such a major regeneration project; we want to create something that everyone in the borough can benefit from and which adds even greater vibrancy to Brixton’s thriving community.”

Cllr Paul McGlone, cabinet member for finance, said: “This development agreement gives the green light to a project that will bring enormous benefits for all Lambeth residents. Your New Town Hall is a great deal for Lambeth taxpayers and businesses.

“Muse has an exemplary track record with town centre regeneration and a commitment to our philosophy, as a cooperative council, of working with the community and its stakeholders throughout the process.

“We look forward to working with Muse to guarantee that residents and businesses are really involved in influencing the design decisions involved in this exciting project as we progress.”