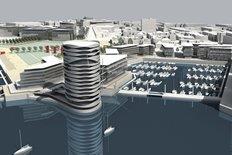 RPW (Southampton) Limited, a joint venture company owned by Morgan Sindall Investments Limited and funders Lucent Group, said it had signed a development agreement for the regeneration of the Royal Pier Waterfront in Southampton.

The development agreement, signed with landowners Southampton council, Associated British Ports and The Crown Estate, is aimed at bringing forward plans to transform the area through a comprehensive mixed-use development of the site.

The existing listed Royal Pier, damaged by a fire and storms, has lain disused and dilapidated for many years.

The redevelopment project, which will be delivered in phases over a number of years, will include offices, hotels, leisure, food, drink and retail, as well as a residential development of waterside apartments and enhancement and improvement of the existing public facilities at Mayflower Park.

RPW (Southampton) Limited will now proceed with the preparation and submission of a planning application for the Royal Pier Waterfront.