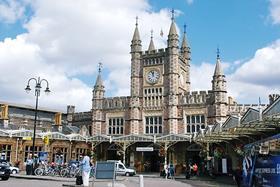 A team of consultants led by Mott MacDonald has been appointed to deliver a masterplan for the future of Bristol’s Temple Quarter.

The 70ha development zone will deliver a new, mixed-use city quarter featuring up to 11,000 new homes as well as major improvements to the nearby Temple Meads railway station (pictured), the UK’s oldest, designed by engineer Isambard Kingdom Brunel and opened in 1840.

The consultancy team, which includes Weston Williamson, AWW Architects, Alan Baxter Associates, GVA, Deloitte, Turley, TLT and Pragma, has been appointed by an alliance of the city council, Network Rail, Homes England and the West of England Combined Authority.

Weston Williamson will lead architecture and masterplanning, while Mott MacDonald will provide multidisciplinary consultancy services including infrastructure masterplanning and railway and station enhancements.