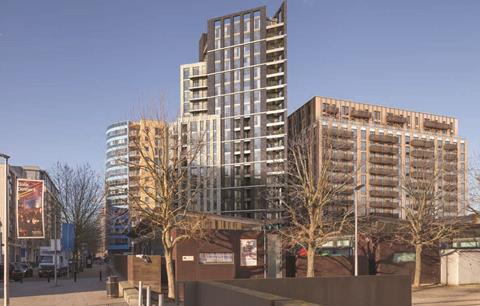 US architect SOM has won planning permission for a 796-home development in east London that features a 23-storey tower as its tallest building.

Members of Newham council’s strategic development committee approved the scheme, drawn up for developers Mount Anvil and the London International Exhibition Centre, at their most recent meeting.

The committee had deferred deciding on the development, earmarked for an 1 ha site adjacent to the ExCel centre, at a meeting in February.

Among their concerns were the development’s scale and massing and the size and type of its affordable housing.

SOM’s two-block scheme will deliver around half of its homes on a hard-standing car park site to the north of the Royal Docks.

Because of the scale of the development, Newham’s decision to approve requires the backing of London mayor Sadiq Khan.

The latest scheme is the second and third phases of work at the site with the first phase, a 19-storey block called Royal Docks West.