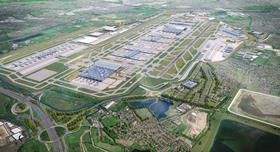 MPs on the transport select committee have voiced their concerns about plans to expand Heathrow Airport.

In a statement on the Airports National Policy Statement (NPS), the committee said parliament should approve it – but only after a number of issues were addressed.

The committee accepted there was a case for additional runway capacity but said there was still work to do before a proposal could be approved.

“The Northwest Runway scheme, as set out in the draft NPS, is the highest cost expansion option and one of the largest privately financed infrastructure projects anywhere in the world.”

While the committee said recognised the efforts by government and Heathrow Airport  to mitigate social and environmental impacts arising from expansion at Heathrow, it said additional safeguards were needed.

The committee said the sections of the NPS dealing with areas including air quality, noise, scheme costs and airport charges, and community impacts and compensation, should be revised before it is tabled for approval by both Houses of Parliament.

A decision by parliament to approve the Airports NPS would allow the planning process to move onto detailed work around scheme design and in effect gives outline planning permission for the government’s preferred scheme, a northwest runway at Heathrow Airport.

Heathrow Airport has said it intends to submit an application for development consent by March 2020.

Greenwood said: “At present, the draft NPS does not guarantee that passengers will be protected from the cost risks associated with the scheme. The secretary of state must set out how airport charges will be held down.

“During our inquiry, we heard how communities might be affected. Thousands of people across London could be exposed to worse levels of noise, air quality and traffic congestion - there must be sufficient measures to protect or compensate them.

“The government and Heathrow have made efforts to mitigate these significant impacts, but safeguards on air quality, surface access, connectivity, costs and charges and noise should be strengthened. As a matter of urgency, we also want to see how the government plans to deliver the necessary airspace change.”

The committee also identified associated policy measures that were required if expansion at Heathrow was to be delivered effectively.

Last month, Heathrow launched a nationwide tour of 65 sites still in the running to be the off-site construction centres for its £14bn expansion.

In November, it unveiled the list of logistics hubs for its third runway expansion programme. These include sites proposed by Laing O’Rourke, Balfour Beatty and Severfield.